The latest member of the new NVIDIA RTX family is the mid-tier RTX 2060. Having managed to incorporate a whole new paradigm with the hardware-accelerated Ray Tracing feature, the new Turing architecture based NVIDIA cards were marketed with a lot of emphasis on the ray tracing and DLSS features. While the graphics cards themselves were quite well received, the new features were most certainly not since no video games shipped with them at launch. Even now, it’s just Battlefield V that has ray tracing enabled while the others are yet to push the new feature out. Needless to say, ray tracing is seen purely as a luxury when it comes to your video gaming experience and that means most of the gamers are going to take the risk-averse approach and buy something in the 60-class or 50-class of graphics cards. It’s not just our opinion, even NVIDIA thinks so as is evidenced by the upcoming GTX 1660 Ti graphics card which will ship without the fancy RTX feature. Hopefully, with the second generation of RTX cards, the feature set will be better optimised and we’ll have more games that have RTX.

The NVIDIA GeForce RTX 2060 is based on the same TU106 GPU that powers the RTX 2070. Up until now, with all previous generation of NVIDIA graphics cards, the 60-class of graphics cards always had a different GPU. This time around, it seams that we’re getting a cut down variant of the RTX 2060’s bigger brother. Since this is an RTX card, we get 30 RT cores which is only six cores lesser than the RTX 2070.

Another thing to note is the pricing, we are looking at a 60-class graphics card which is $150 dollars more expensive than its predecessor. That’s a huge jump especially given that the 60-class graphics cards are the sweet spot in NVIDIA’s lineup. This is why 15.39% of Steam users have the GTX 1060, a good 6% lead over the second most popular card. Suffice to say, the RTX 2060 is not going to end up as the favourite among gamers. 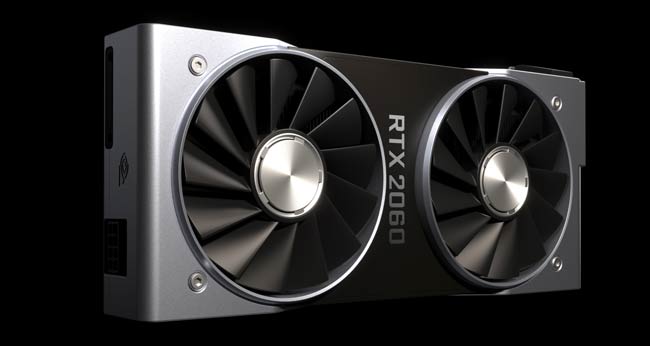 Given that the GPU is the same on the RTX 2060, it would be exciting to see if any of the new cards can be cross-flashed to unlock the disabled cores. This would only be possible if the disabled ones aren’t fused off. One can always hope.

Our test rig has been upgraded to keep up with the times and the new Windows releases. This means all our legacy scores are not comparable, specially given the fact that CPU performance has gone up by a significant margin. Here’s what we’re running at the moment.

We ran the usual set of synthetics on the RTX 2060 which includes a host of benchmarks from 3DMark, Unigine, Compubench and a few others. Here’s how the RTX 2060 fared. 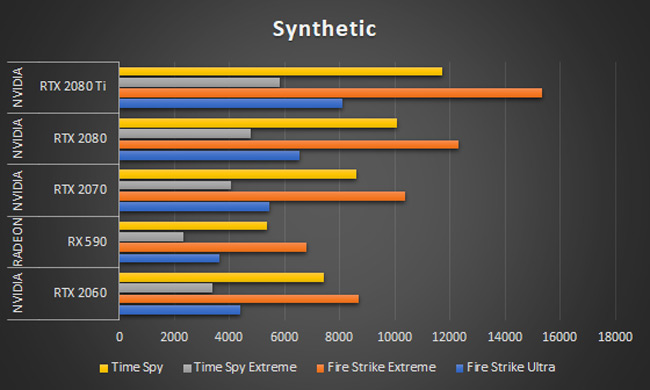 The part that stands out about this graph is the relative performance within the family and how it has scaled since Maxwell. Our old benchmarks peg the FireStrike scores of the GTX 960 to that of the GTX 980 at a ratio of 1.95. Which meant that the 80-class card would be roughly 2x better than the 60-class card in performance. Now if we are to see how the RTX 2060 compares with the RTX 2080, then the same metric produces a factor of 1.26. Essentially, the RTX 2060 is a lot closer to the RTX 2080 than how the previous generation of graphics cards used to be. This should tell you why the RTX 2060 is priced so much. It’s not just about the new Turing cards being expensive to begin with but the relative performance also plays into the high pricing. However, gamers don’t spend days and nights comparing 3DMark scores, so let’s see how this fares in gaming. 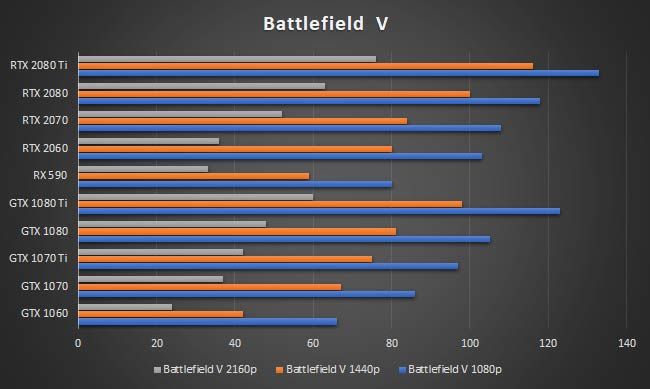 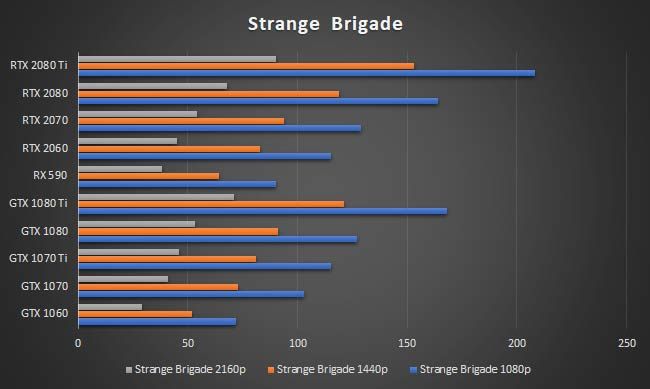 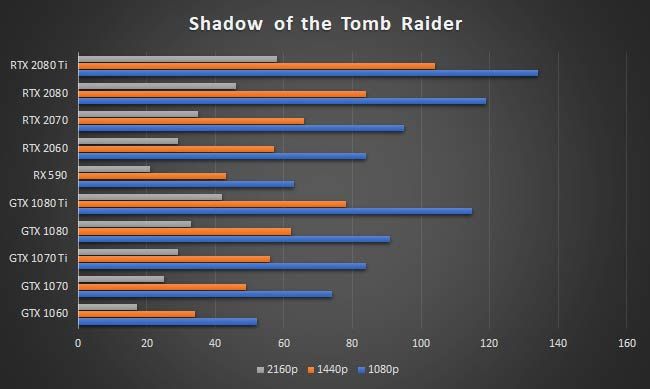 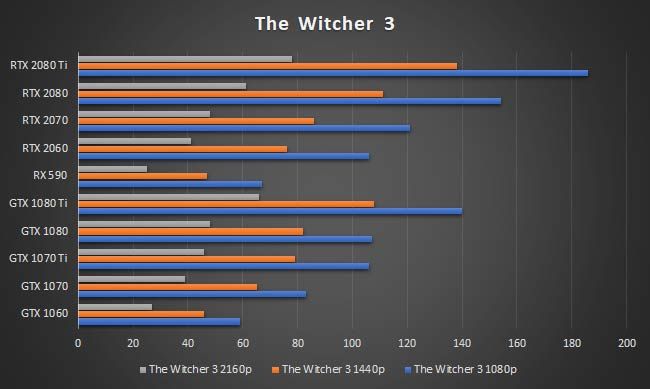 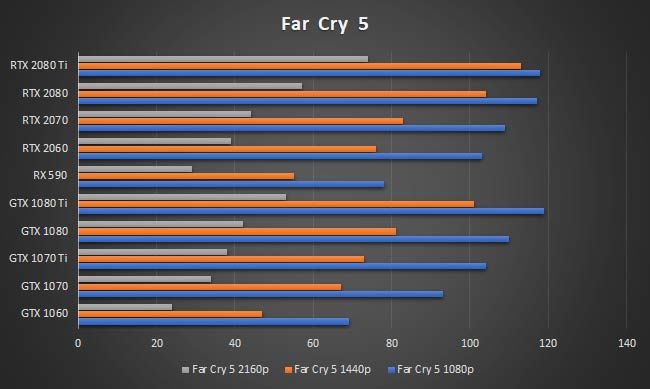 We see a very linear scaling of performance across the RTX family of graphics cards. Please note that the benchmarks for the 10-series cards are from our older test rig which had a different HEDT CPU. The performance difference isn’t much but we don’t use the same in our scoring mechanism for the sake of consistency. For 1080p gaming, the RTX 2060 just about equals the GTX 1070 Ti in practically all DirectX 11 and DirectX 12 video games. The same trend can be seen even when the resolution is scaled higher. With the 10-series cards, we see quite a bit of frame rate drops at higher resolutions. Don’t bother looking at the Far Cry 5 numbers since it’s one of the least scaling video games we’ve come across. It’s the only game where the GTX 1080 Ti still scores more than the RTX 2080 Ti. You can also see how the RTX 2060 frame rates are closer to the RTX 2070’s frame rates. With the 10-series cards, this delta is much higher. What we’re looking at is simply not a 60-class card.

The NVIDIA RTX 2060 Founders Edition is priced at Rs.31,000 and is bundled with a free game. You can pick either Anthem or Battlefield V if you get the RTX 2060 FE. All partner cards don’t get the free games from NVIDIA though they are absolutely free to offer bundles themselves. There have been multiple threads wherein confused buyers end up not receiving the bundled game because the retailer isn’t participating in the bundle program. Pricing for the card on NVIDIA’s own store is lower than what their board partners are offering at the moment. So NVIDIA has a clear advantage and there’s practically no reason to get a partner card unless they have a value proposition that’s better than what NVIDIA is offering. 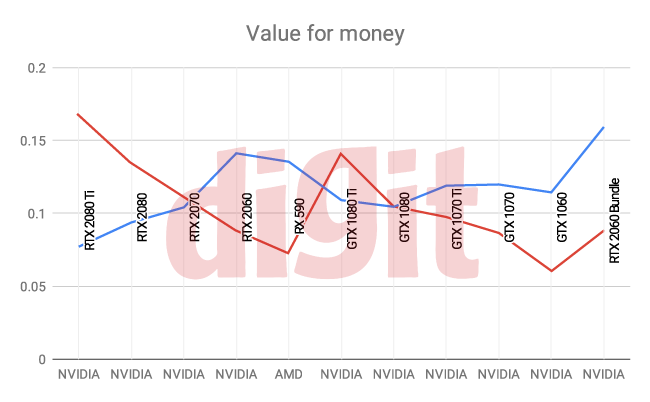 To better understand this, we’ve plotted a graph to showcase value for money based on 3DMark Ultra scores for each of these cards vs their current India pricing. With or without the video game bundle, the RTX 2060 currently offers really good value for your money. The AMD RX 590 comes second after which it’s the previous gen GTX 1070 Ti and GTX 1070 that seem better purchases. We’ve added an overlay of the curve indicating the relative benchmark scores in red to show performance with respect to each other. The performance of the RTX 2060 being very close to the GTX 1070 makes it really good but the GTX 1070 has the advantage of having 8 GB VRAM against the 6 GB that the RTX 2060 has. If we offset the cost of the additional memory then the GTX 1070 Ti appears as the better option. However, the two cards use different memory technologies. The RTX 2060 has the faster GDDR6 memory with a cumulative bandwidth of 336 GB/s while the GTX 1070 Ti tops out at 256 GB/s which means the RTX 2060 has more overhead and thus, lesser chances of bottlenecking. Please don’t get us started on SLI. TL;DR – The RTX 2060 gives you the best bang for your buck.

NVIDIA’s RTX 2060 is a welcome addition to the RTX family of graphics cards. It’s got quite the performance upgrade over the previous generation GTX 1060 and comes with a price tag to match. One could argue that the premium is for the RT cores and they’d be right but the 60-class of graphics cards have always been about catering to the intersection of affordability and performance. The RTX 2060 gets the performance part right but is nowhere close to being affordable, not at all for the Indian market. Even NVIDIA knows that which is why we’re going to see the GTX 1660 Ti in roughly a month’s time without any of the fancy RT cores. Another distinction with this new generation is that the RTX 2060 is very much closer to the RTX 2070 in spec. They also share the same GPU although the RTX 2060 has six SMs disabled. 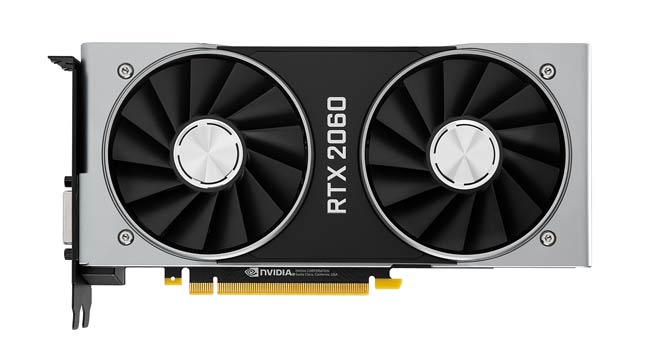 This is why we see the performance that is much higher than what we’re used to seeing. It feels somewhat like the second coming of Maxwell, but the price tag is what keeps it at bay. Performance wise, we have a card that equals (and sometimes betters) the GTX 1070 Ti in 1080p as well as 1440p gaming benchmarks. It’s even faster than the Radeon Vega 56. However, we don’t see it selling well compared to previous 60-class graphics cards. It will most certainly match sales of 70-class graphics cards. All of this makes the RTX 2060 an excellent gateway card for those interested in experiencing hardware accelerated ray-tracing. For gamers who want an affordable and powerful card can wait a month for the GTX 1660 Ti launch