Sony has launched the Sony WH-1000XM4 Wireless Noise-Cancelling headphones today in India, priced at Rs 29,990. Sony is also offering Rs 1,500 off as an introductory launch offer on purchase of these headphones until September 30. These flagship wireless headphones were launched globally in August at $350. The Sony WH-1000XM4 are the successors to the critically-acclaimed Sony WH-1000XM3 headphones that were also launched in 2018 at Rs 29,990 in India. The product, unlike the Sony WF-1000XM3 true wireless noise-cancelling earphones, has been brought to Indian shores relatively quickly following its global launch, making fans of the brand and the previous model rejoice. The device is available to purchase on the Sony website, Amazon India, and across retail stores in India.

Featuring an almost identical design to its predecessor, the Sony WH-1000XM4 also employs the same 40mm drivers and the QN1 noise-cancelling processor as the Sony WH-1000XM3. However, newer, improved algorithms have allegedly led to up to 20 percent increase in ANC performance in comparison to the previous model, as per Sony. The company also made an effort to address user feedback it received from customers for the 1000XM3s and added LDAC codec support as well as multipoint connection, which allows the headphones to be connected to two devices simultaneously. 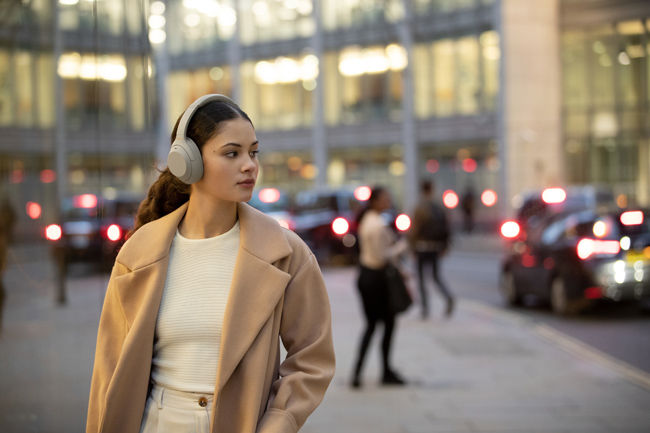 Sony has, however, omitted the aptX, aptX HD and aptX LL codecs in favour of SBC, AAC and LDAC codecs. They have also included DSEE Extreme, an AI-driven process that digitally upscales lossy formats of music to restore detail. Mr Mani B stated, “We believe that LDAC and DSEE Extreme more than compensates for the absence of aptX. Thanks to improvements in the Bluetooth SoC, the latency is lower in the Sony WH-1000XM4”.

The headphone also comes packing nifty features such as Quick Attention, which dramatically lowers the volume of music and turns up Ambient Sound when you cup the right ear cup to have a quick conversation or listen to the surroundings, and Wearing Detection, which automatically pauses or plays music when the headphones are taken off or put back on respectively. The company has also introduced a brand new ‘Speak-to-Chat’ feature which automatically pauses music when the headphones detect your voice, allowing for seamless transitions between music playback and having conversations.

The Sony WH-1000XM4 sports 30 hours of battery life with noise-cancelling turned on, and a whopping 38 hours with noise-cancelling turned off. The battery life has also remained the same as the older model. Users also get access to Fast Charge, where 10 minutes of charging results in 5 hours of playtime. The Sony WH-1000XM4 is also supported on the Sony Headphones Connect app which allows users to access features such as location or activity-based Adaptive Sound control, customisable noise cancellation and ambient sound, adjustable equaliser, music presets, adjustable Custom button function, and more.